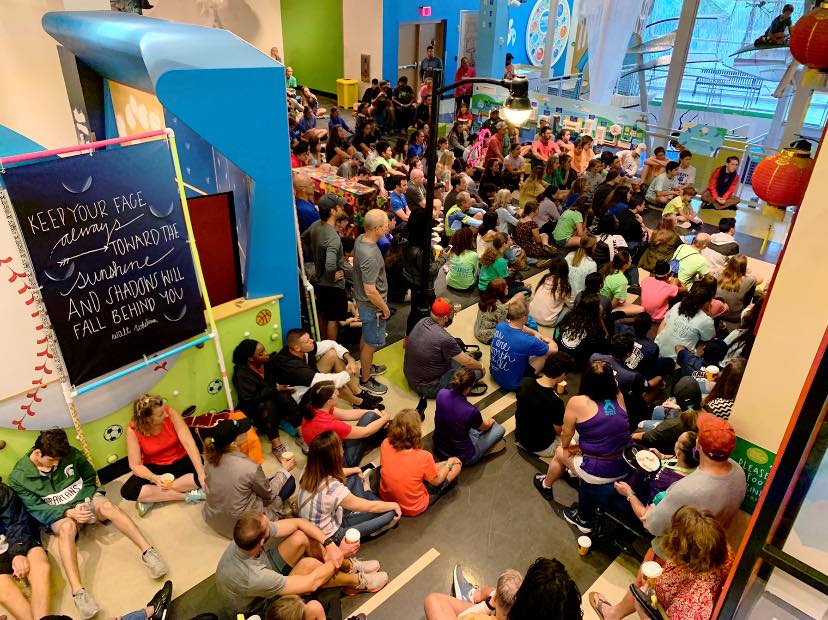 Race attendees gather inside the Glazer Children’s Museum of Tampa for a one-hour mental health program led by the Cameron K. Gallagher Foundation.

Tropical storm warning? Challenge accepted. This past weekend, the Cameron K. Gallagher Foundation hosted its 4th SpeakUp5k Tampa, FL race. When the race course location got shut down just one day before the event due to tropical storm warnings, the CKGF team put their heads together and came up with an indoor solution that, in Dominion Payroll CEO Dave Gallagher’s opinion, “may have been one of our greatest events yet.”

What made this year’s event so special? Here’s a message from Dave himself:

“We arrived on Friday to a tropical storm warning. The park that we use for the race called us to let us know that any sign of thunder or lightning would constitute immediate park closure. And, of course, the storm was scheduled to arrive Saturday morning, right around when we were supposed to set up. Very troubling situation. But, as the CKGF so frequently do, the leadership team sat back, thought deeply about options, and came up with a brilliant plan.

Dennis Gallagher, my brother and CEO of our Tampa office, called his connection at the Glazer Children’s Museum of Tampa asking for a huge favor: ‘Could we possibly bring 500 people tomorrow at 8 a.m. and host a SpeakUp Mental Program?’ And, due to his close community relationship, they said: ‘Of course, we’re in, how can we help make this successful?’ They brought their staff in two hours early to help us.

This is where the magic happened. CKGF superstars Grace Gallagher, Melissa Phillips, and Katherine Cook huddled up to create a one-hour mental health program suitable for all ages. Hundreds and hundreds of people came despite the 40-knot winds and driving rain. The entire second floor of the museum was full of people, most of whom were teens. The CKGF team crushed it and I wish all of you could have experienced the amazing work that was done. Though we may not have hit the same fundraising goals that we’ve reached in previous events, it’s hard to debate if there’s been a more personal, impactful SpeakUp day, considering all of the variables that went into making this happen. Bravo team! Bravo!”